SB Creative Corp. ("SB Creative") announced that English editions of 1,000 Harlequin Japanese comic books (also known as "manga" or graphic novels to English-language readers) will be available to international readers as of Friday May 1, 2015.

Japanese-language Harlequin comic book titles are adapted from Harlequin's extensive list of romance novels. SB Creative and Harlequin K. K. also collaborate on the digital distribution of these titles in domestic and overseas markets. The increasing availability of more digital Harlequin comic books in English will appeal to current readers of Harlequin novels, which are sold in 109 countries worldwide, as well as readers of graphic novels and manga. English editions of Harlequin comic books are available on major digital book platforms in North America and in Europe, as well as on the website Balloons & Chapters® (www.balloonsandchapters.com), which is run by SB Creative.

SB Creative will continue to extend its range of English-language editions of comic books while also increasing their availability in English-speaking territories.

Availability: major digital book platforms in North America and Europe
Balloons & Chapters® (http://www.balloonsandchapters.com/).
All territories and to all consumers with access to these websites.
Single titles are priced at USD 5.99. 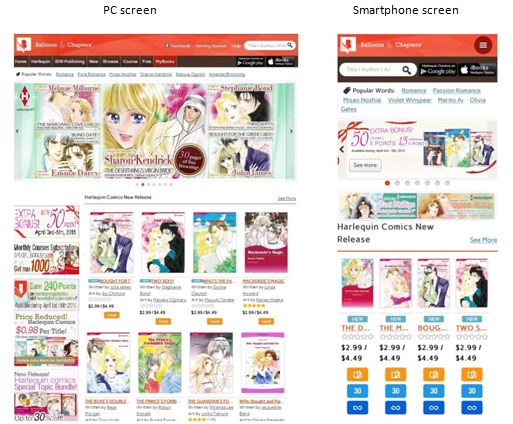